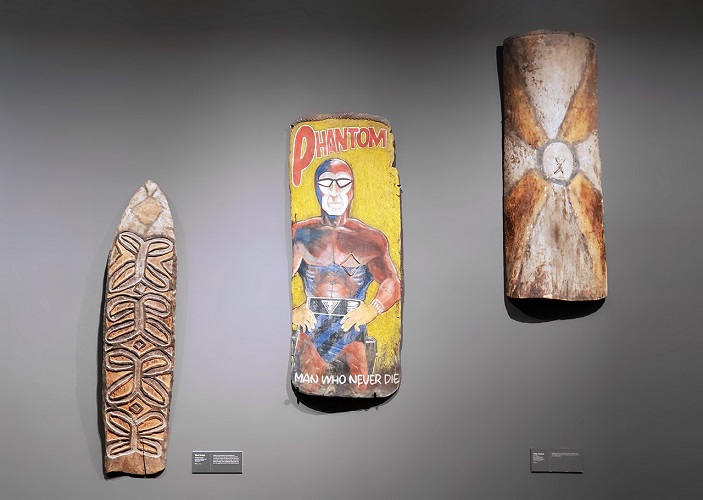 Currently on display at the Bowers Museum in Santa Ana, California, USA is a Papua New Guinea Phantom Shield.

Exhibited in the ‘Spirits and Headhunters: Art of the Pacific Islands‘ collection, the Bowers Museum have recently acquired a new Tribal Shield, as can be seen above on display. The New Guinea Highlands Shield proudly displays an image of the Phantom, which also contains the words ‘Man Who Never Die‘

We read how the Phantom came to the attention of the Pacific region:

Coming to New Guinea by way of its Australian administrator, between 1973 and 1977 the strip was translated into Tok Pisin—the mostly widely used language in the country—and published in Wantok, a weekly Catholic periodical distributed to thousands. As a superhero who fights evil doers, venerates his ancestors, and protects a fictional state that at the time bore a great many similarities to Melanesia’s largest island, the Phantom quickly caught on as a national icon.

Although Shields may seem as a primitive form of weaponry in our current world, they were still in use in Papua New Guinea in the 1970s:

In the 1970s the costumed hero became a spokesperson in government advertisements for healthy eating. Around ten years later a period of intertribal war broke out in the Western Highlands Province which lasted into the ‘90s. Though guns were used in some areas and made shields ineffective, in many other regions only traditional weapons were used.

We read about this particular Shield on display:

Now though, rather than rely on traditional geometric and abstracted ancestor forms, old shields were repainted with the Phantom. This particular composition with a yellow ground, red lettering, an emphasis on musculature, and slightly distorted proportions is characteristic of Kaipel Ka, a sign painter from the Banz township who painted shields during and after the period of intertribal warfare.

We’re given a reason as to why the Phantom’s motif appears on Papua New Guinea Shields:

The Phantom may not have super strength or heat vision, but he is capable of superhuman feats through his indomitable character. He is known as “the man who cannot die” not because he is immortal, but because his mantle will be taken up by his successors, his family.

The Phantom Shield has been added to the exhibit in memory of Dr. Peter C. Keller, who unexpectedly passed away in November 2022, who was the President and CEO of the Bowers Museum and very much favored the ‘Spirits and Headhunters: Art of the Pacific Islands‘ exhibition.

The Blog Post is an interesting read, clearly giving us good information on Phantom Shields originating from Papua New Guinea in an easy to understand manner. The Shields have such a fascinating and unique history, certainly not seen in other parts of the world, nor with other comic book characters.