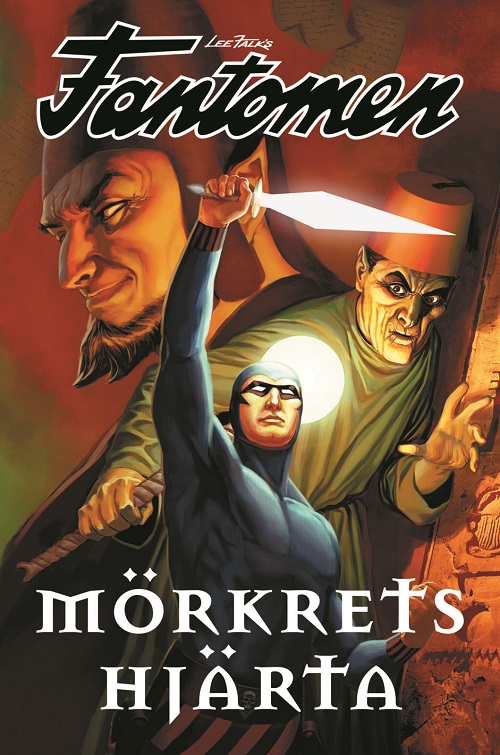 Appearing on the Bild & Bubbla website, we see an article written by David Haglund, giving us some information on the Trade Paperback, plus a first look of the cover image illustrated by Luca Erbetta.

The Trade Paperback will feature the full Phantom story titled, The Heart of Darkness, written by Claes Reimerthi and illustrated by Joan Boix. The Team Fantomen series story is a 389 page long story which was originally published as a backup story in Fantomen comic books in Sweden, between 1994 thru till 1996 under the heading of Fantomenlegender (translating to ‘Phantom Legends‘).

The story sees the Phantom battling several supernatural elements, which was published over 49 episodes made up of 7 to 10 pages. In 2009, a 38 page supplement was published by Egmont, the 50th and final part of The Heart of Darkness.

The story has been published in a variety of other countries, including Finland, Norway and Australia, however never in the one publication.

Fantomen – Mörkrets Hjärta is due for release in early August, 2022. Information on the Trade Paperback are still very vague, with no details yet available on how many pages it’ll contain, or what additional content may be published above and beyond the comic strip. The book will be published in Swedish language.

Several book sellers in Sweden have listed the book for pre-sale, including Adlibris and Bokus, however only vague information is provided. They list the basis of the story as being:

An ancient mystery chases the 21st Phantom around the world and back in time! A thousand-year-old conspiracy, immortal murderers and secret societies threaten to destroy the earth with the help of unnatural forces. It is up to the Phantom to go to the heart of darkness to stop them.

The Heart of Darkness is the longest serial in the history of the Phantom, and now the entire epic is available in a large, luxurious collection.

Update: Fantomen – Mörkrets Hjärta will actually be a Hardcover Book and not a Trade Paperback as noted above, making the publication a little more special!! Thank you Andreas Eriksson on Facebook for the correction, greatly appreciated.