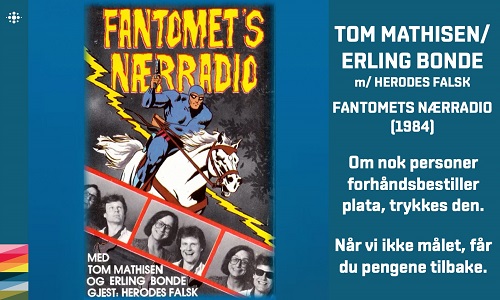 Currently listed on the Bidra.no website, we see Fantomet’s Nærradio featuring Erling Bonde and Tom Mathisen being advertised as a Crowdfund campaign.

The campaign has been launched by Falck Forlag AS, commencing on the 27th of October 2021 and is due to expire on the 26th of November 2021.

Originally released in cassette form in Norway in 1984, Fantomet’s Nærradio is a mix of Rock/Pop/Children’s/Stage and Screen songs, containing 13 tracks, 3 of which feature the Phantom.

Fantomet’s Nærradio cassette was later advertised for purchase in Fantomet comic number 16 in 1985. We find a booklet within the comic titled Hevneren with a mail-away coupon for the cassette.

The Crowdfund campaign currently found on the Bidra.no website is for these same tracks to be released on a CD, with various options available in regards to supporting the campaign. We have the options to purchase 1, 2 or 3 CD’s if the campaign is successful.

The description we find on the Bidra.no website is:

Fantomet’s Nærradio with Erling Bonde and Tom Mathisen is an advertising cassette that was released in 1984, and sold together with the comic booklet Fantomet hevneren. It is set up as a local radio broadcast, but humor, advertising, chatter and music. Three of the songs are about the Phantom: “The Theme of the Phantom” (which was used in an advertising context for the Phantom in the 80’s), “The Boss” and “The Spirit That Walks”. Herodes Falsk is a guest on the album, and the music is played by members from Lava. Also contains a song with The Monroe’s “Sunday ‘on Mazda”.

The Crowdfund campaign also provides us with a sample of the content on the CD.

To read further on the Fantomet’s Nærradio Crowdfund campaign, click on the link HERE